There is this big debate about winning and children, that goes around in all English speaking countries. It argues that children should not have to confront competitiveness. They should all be winners. I have made my case clear elsewhere what I think about this. But being a winner doesn't always mean that you have to win.

This is not a paradox. It is simple logic. someone said "If you loose don't loose the lesson".

Judo by definition is about getting up after you have fallen. That is the lesson we learn from break falls.

One of my previous careers was technical. The worst thing that could happen to a good technician was to receive a new piece of equipment, put it together and have it work first time. All the Tech's I knew hated that and said "well that was boring". Why because they learned nothing. They had just followed the directions.

I remember reading an email when I was on one of the early email lists, about a guy who had gone to Japan for extra training only to be called on by the high ranking instructor. Feeling embarrassed about the fact that no matter what he did he was easily thrown to the mat, he fully expected to be scorned by the rest of the club. He was surprised to hear the instructor say to him, at the end of the session "Good Judo". Apparently the falls were well executed and worthy of praise. 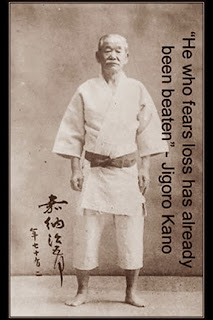 The most enjoyable night that I have ever had in judo was when I was a junior and we had a guest instructor from Japan. He chose me for the night and with what seemed like the touch of his two fingers I spent the rest of the night examining the roof. Every time I got up I found myself examining that roof. Such grace and power with nothing negative to be observed. I have no idea who he was. I was but a teenager and not grown up enough to remember who he was but I spent the rest of my Judo career trying to emulate the way he move on the mat.

The biblical Paul (most call St Paul) was a complete looser, in that he was beaten, wiped, stoned, ship wrecked and put in prison. But it can be argued, that as a result of his resilience, the whole of the Gentile world knows of the salvation message of Jesus Christ(weather you believe that message or not).

Funny Professor Kano knew what he was talking about.

Do we really want to take that away from our kids. As long as we care for them when they loose we have to let them loose because without loosing no one ever wins.