What is the Difference Between Summer and Winter in Judo?


Lets face it Martial Artists (MA) are a bit weird and Judo Players are no exception.

I remember a conversation I had with the development officer (D.O.) of Judo Victoria. She was telling me how her own sporting back ground had nothing to do with MA and it took her a little getting used to.

For example: she was watching a junior contest and to begin with she was confused that at that age, here in Australia boys and girls fight each other. As she was getting over that shock she saw a one player thrown rather hard and she thought the young girl was hurt. The D.O.'s immediate reaction was to run on the mat and see if the player was OK.

Of course this would have resulted in an immediate disqualification for the child and the D.O. was stopped. "Woe, hold up lets just wait and see what happens" said her companion. As she watched she noted that nobody, including the parents was particularly perturbed about the throw or the child.

She watched as the referee walked over and spoke to the child, clearly asking if the child was alright and whether she wanted to continue. When the child replied in the affirmative, she got up and was cheered by all those watching. 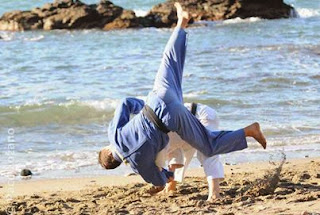 When the D.O. had finished relating the story to me, she finished with: "you guys are weird!" "Injury" she said "to you is a badge of honor not something to shy away from."

Whilst I don't quite agree that we don't shy away from injury, there is a sense in which we have a different way of defining fun. What is fun to us is defiantly not what most people nor most sports people would call fun. Proof of this is in the photo and the video attached.

Judo players have no compunction about throwing another Judoka on the beach or in the snow. Lets face it judo is an all year round sport. To us there is not difference between playing Judo in the summer or the winter.