Tani Otoshi: A Standing Version or is it Ushiro Goshi

Tani Otoshi: Caught from behind

This version of Tani Otoshi (below) was shared with me on Facebook and I found it most intriguing.

You see I have never performed this throw as anything other than a sacrifice throw. Its simple really; it is the same as this version except you throw your whole body into the movement and land either on top of or beside them on your front.

It's a very powerful move and I usually ended up with a good score once I gave myself to it. The problem has always been, as with all sacrifice throws, if you miss you are in a vulnerable position.

That's the beauty of the version below, it is not a sacrifice. Yet it does seem to be perfectly functional.

The question however is whether this is Tani Otoshi or actually a version of Ushiro Goshi. You see the Kusushi here is as far as I can see the same as Ushiro Goshi simply because Tori remains standing; despite the fact there is a sweep. There is no rule that says that you can't sweep in Ushiro Goshi.

Still despite my question, this could be a very effective throw in competition and worth practicing. Besides in the end as long as there is a score, the only people that care about the name are nitpicks like me. 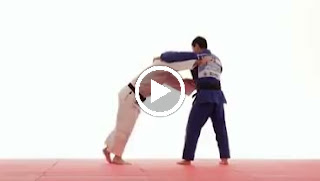